Yes, does that answer your question? I didn’t think so. Every now and then we get emails and phone calls from practitioners in New Jersey asking us can I (licensed acupuncturist L.Ac., Dipl. Ac.) use ASP ear needles on my patients?  At one time you could not use ASP ear needles or keep any medical device in after your treatment (as a L.Ac). About two years ago that changed and you may now use ASP needles on your patients in New Jersey and have them leave your clinic with them. Don’t take my word here is a link to the law. http://www.njconsumeraffairs.gov/adoption/acupado_062110.htm

You’ll find it about half way down on the page. What the law says is you can use the following types of needles and just below that what you can’t use.

First, here are the needles and types you may use in New Jersey as an acupuncturist.

Let me clarify what is a “Staple” and what a ASP needle is NOT.

A “staple” according to Webster’s is

:a usually U-shaped fastener: as
a: a metal loop both ends of which are driven into a surface to hold the hook, hasp, or bolt of a lock, secure a rope, or fix a wire in place
b:a small wire both ends of which are driven through layers of thin and easily penetrable material (as paper) and usually clinched to hold the layers together
c: a usually metal surgical fastener used to hold layers of tissue together (as in the closure of an incision)
An ASP ear needle is
First let me first start off with saying what the letter’s ASP stands for. They are French for Aiguille D’ Acupuncture Semi – Permanente, translated as Semi-Permanent Needle. Aiguille is needle in French. ASP needles are temporary needles that stay in the ear for a few days.
As you can see a staple has two points and an ASP is temporary, not permanent.

An ear staple is used mostly for weight loss and it has two points, it looks like a staple. Here is a picture of a ear staple in a patient’s ear.

Here is a side by side picture of a staple and a ASP needle. 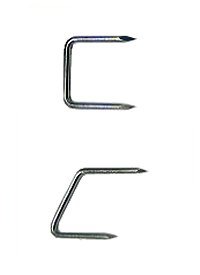 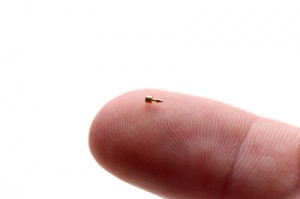